A Blu-ray archive solution will be more expensive to purchase than an equivalent hard disk or tape based solution, but it will last much longer!  A Blu-ray archive is designed to store critical data for a very long time, this data must not degrade and be able to bring back the data when required in 10, 20 or 50+ years. 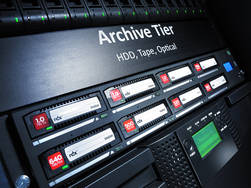 Why not use a hard disk RAID?

Firstly RAID systems fail, they are not designed to remain idle for long periods of time and they cost a lot of money to maintain and consume more energy.  They are mechanical devices with lubricants to keep everything spinning and running smoothly.  Another failing of hard disks is that there is no easy way to duplicate and store a second or third copy without the huge expense involved in doing so.  In 20 years time would you be able to purchase a replacement drive, probably not.  A hard disk is also not very robust and will suffer damage if dropped.

Why not use an LTO tape?

Using an LTO library does make more sense than an equivalent hard disk based system, but this again has issues.  If I write an LTO tape with backup or archival software I cannot simply remove that tape from the library in 10 years and play it on another computer system unless I have the correct version of software that originally wrote it.  Another issue with tape is that it is far more prone to environmental damage such as heat, humidity and dust than any Blu-ray archive and the tapes need to be kept in environmental controlled conditions.  The new LTFS open standard for writing tapes does away with software but it was only launched with LTO-5 and has so far not been widely adopted.  Another potential with LTO is that it can only read the two previous generations of tape and at the moment the roadmap only runs to generation 10 and we are on 7 today.

If you need to archive to LTO then I would suggest re-consider after 5 years and store for no more than 10 years even though the media is rated to store data for 30 years.

Use SSD for archiving data

Whilst an SSD would appear to be a good medium for archiving data it’s upfront cost is very high, another issue is no one has tested to see if an SSD will last 20+ years and currently there are no WORM based SSD devices.  This could be a viable alternative in the future but further testing and investment would be required.

Why use a Blu-ray archive?

Blu-ray is an optical based technology which uses a Blue laser to write pits in the disc surface.  A Blu-ray disc currently stores 100GB on a four layer disc sandwich (25GB per layer).  The Blu-ray drive can read CD, DVD and all versions of Blu-ray discs including 25GB, 50GB & 100GB.  The BD drives are designed to also read/write 128GB media when it becomes available.

A Blu-ray archive makes perfect sense for storing very high resolution images, CAD drawings, video or any other form of digital data or documentation from a DMS (document management system).

What makes a Blu-ray archive solution a good choice?

The installed base of Blu-ray readers runs in to 10,000’s and there is a very high likelihood that in 20 years time a Blu-ray reader will still be around to read your data.  A Blu-ray disc is incredibly tough just look at this video http://www.youtube.com/watch?v=o5jEbZt6AIQ.  Blu-ray media doesn’t have the same storage issues as tape as it is can be stored at normal room temperature and just needs to be wiped if it gets covered in dust.

They are easy to duplicate, have extensive error correction, do not take up much space and are reasonably rugged.  One other thing that a large car company thought about was if an EMP (Electro Magnetic Pulse) was to the strike earth via a solar storm (it nearly did in May 2013) and hit their computer systems.  The only recoverable data left to recover would be optical!

Providing you write your Blu-ray media in UDF (click here for more information) will ensure that your BD Archive discs can be read by any BD reader without the need for additional software to read them back.

Due to the way the Blu-ray disc is written makes Blu-ray an ideal solution for submitting legal data to court as once it is written it cannot be overwritten and therefore is a “True Archive Media”.

Given the choice of currently available storage technologies Blu-ray makes a very compelling case as a long term archiving technology and as such should be seriously considered when choosing a technology where permanence and access are key criteria.